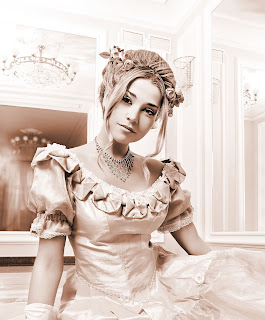 The Duke of Montmouth’s Winter Ball was the first the duke had had since his marriage last winter. As such, it promised to be a memorable event. Anastasia Trent, the only daughter of the Earl of Marks, had been looking forward to it for weeks. Ever since her father informed her of the betrothal to Baldwyn Sinclair.

Anastasia had been in love with him for ages, though he had never shown much interest in her. Truth be told, she hadn’t seen him in several years, but that last meeting still made her cringe with abject shame. How she could have ever been so purely disgraceful and immature was beyond her own understanding.

She only hoped he had forgotten the incident.

There was a sort of hope in that he had agreed to the betrothal. At any rate, tonight they would announce their engagement, and he would be hers forever, just as she had always dreamt.

Last year, her eighteenth year, she had begged her father to allow her to sit out another Season and debut at nineteen. She realized it would be strange to be presented so late, but there was only one man she had ever wished to marry, and as he was in Scotland, there was no use in coming out.

Her father had always indulged her every whim, and though Anastasia had never told him her reasons for hesitation, she knew he had a suspicion. When he brought her into his study one day a few weeks ago and asked her how she felt about a marriage to the duke, she could hardly contain her enthusiasm.

Finally, the evening of the ball had arrived. Anastasia had spent the entire day preparing herself—two baths, four hairstyles, and seven gowns later, she was ready to meet her groom-to-be. A bit of the old schoolgirl giddiness bubbled in the pit of her stomach, and she prayed she wouldn’t have to make another trip to the necessary.

Her father awaited her at the foot of the staircase. Her heart soared as she descended, and her feet hardly touched the floor. If the look on her father’s face was any indication, the pale gold gown she had finally settled on was the perfect choice.

“You are a vision, my sweet,” her father crooned, offering his arm gallantly. His broad grin and sparkling blue eyes warmed her heart. He still cut a dashing figure with the brush of silver at his temples, highlighting his chestnut hair. It was a shame he refused to marry again after her mother had passed away.

He often told her she looked like her mother, but Anastasia knew it wasn’t true. She had his hair and his eyes, while her mother was a blonde beauty with marvelous hazel eyes. If she inherited any of her mother’s traits, it would have to be her spirit…her sense of adventure. Though Anastasia hardly remembered, her father told her many stories of Lady Marks’ escapades. Each new story inspired her more than the last.

Her favorite, of course, was the tale of how her mother captured her father’s heart.

It was that story—that fairy tale—that burned in her soul since childhood.