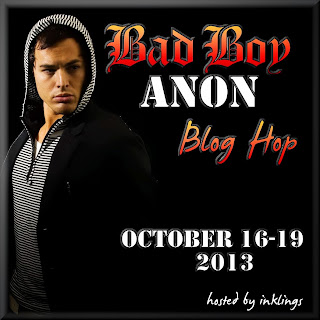 Welcome to the blog hop!
This may be dating me, but when I was a kid I used to LOVE watching 'Happy Days' re-runs. The Fonz. Seriously. The ultimate Bad Boy. He could snap his fingers, and girls would literally come out of the woodwork and fall all over themselves to get to his side. There's just something about the bad boy.

And let's face it.
Some of us are more addicted than others.

Allow me to feed your habit! I have three ebooks to giveaway today. Each one with a bad boy hero to satisfy your craving.

Just leave me a comment below with your favorite Bad Boy of all time (don't forget contact info so I can let you know if you win!). I'll draw three names at random to give away one of the three following books (winners' choice).

The Picture by Stephanie Taylor

Sophie lives her life as a hospice nurse running from her past and over-compensating for her sins. She wants nothing more than to help others the way someone once helped her. But she never expected to get so attached to one of her patients. Nicholas is suddenly looking for more meaning in his life than money, fast women and flashing lights. Life as a rocker has left him empty. Only Emily filled the gaping hole in his heart and with her death, his soul is broken into pieces. When two lives collide, Sophie and Nicholas know they'll never be the same. Together, they try to figure out a message Emily has left behind. Can they succeed before the realities of life tear them apart?

Driven to distraction by the redhead across the room, Anthony Benson barely hears the terms of his brother’s challenge before agreeing to them.

No matter. It will be easy. Viscount Maddox has never had any problem impressing the ladies. And four weeks is more than enough time to win over this so obviously neglected wallflower.

But things are never as easy as they seem.

The lady has lofty aspirations. And not one of them includes love or marriage. Especially not with an arrogant and self-assured playboy like the viscount. No matter how attractive he may be.

I'm not your typical girl. I've been running away from the memories that haunt me for so long that depression has become my only comfort. I was content in the darkness...until Wes Michels offered to be my light.

I didn't know that time wasn't my ally -- that every second that ticked past was one step closer to the end of something that was beginning to mean the end of myself. He tried to warn me. He promised me all he was able to offer--each moment as it came--but it would never be enough.

Sometimes when you think it's the end, it's only the beginning. Wes thought he could save me, but in giving me everything, he ruined me. Because after one kiss, one touch, I couldn't--I wouldn't ever be the same.

And from that moment on, his heartbeat became my own.

Don't forget to follow the hop! Lots of Bad Boys to be had! :)