When I was in second grade I used to get in trouble for talking in class. Apparently, I was so social the teacher felt I needed to be removed from temptation. She moved my desk behind the book shelf.

Those of you who know me will probably have difficulty believing this to be true. But it is.

Somewhere along the way I swung that pendulum to the other extreme and became so dreadfully shy that it was difficult for me to carry on a normal conversation with anyone I didn't know. And even if I did know you, if anyone else was around who could hear me talking, I probably wouldn't.

In the classroom, I would have to leave the room to collect myself and get a drink of water before attempting to give a speech. I know, I know. Why did I ever become a teacher?

When I met my husband for the first time I was a Christmas party with one person I knew and about ten others I didn't. I sat hiding behind the food table away from everyone because I was nervous about talking to anyone. My friend had to physically drag me into the living room to socialize.

My husband is the opposite of me. He talks nonstop. So he started the conversation (obviously I wasn't going to do it): "So, do you go to school with Amy?"

It didn't occur to me that it was still my turn to talk. After all, I had answered the question. I should be done. It's somebody else's turn. Right?

Nobody else seemed to agree with me. Three pairs of eyes stared at me expectantly--Amy's, her mother's, and this guy's. A sudden fear shot through me when I realized they wanted me to say something else. Naturally the words tangled up on my tongue making it impossible to structure a cohesive sentence, but eventually I stammered out, "I go to school in Florida."

Lucky for me, my husband doesn't really need my participation in order to carry on a complete conversation. So he prattled on for the next couple of hours, asking the occasional question and eventually wearing down my social defenses. What was I to do? I married him.

Being shy is a bit of a handicap. It's difficult for someone to get to know me at first, and only the persistent make the cut. Not because I'm exclusive, mind you, but because I need a little coaxing out of my shell. Ask my husband. Ask any one of my good friends. I hope they say it's worth it. :)

Not that I'm biased at all, but introverts really do make the best friends! They're definitely more than they appear at first glance. 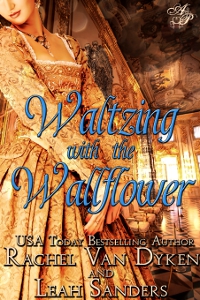 Take Cordelia from Waltzing with the Wallflower. She's a lot like me. That's probably what made her so easy to write. I just thought, "This is how I would feel and think." Then I projected that onto her. She's scared to death of attention. The very thought of it makes breathing difficult. Yeah, I get that. To look at her, one might think she has no personality. But she's so much more than just the girl in the hideous dress camouflaging herself behind the house plants.

Witty, intelligent and so funny.

But she wouldn't have you know that...no. She would say, "Let's keep it our little secret, shall we? We wouldn't want the ton to get the idea I have a personality."
Posted by Leah at 9:58 PM