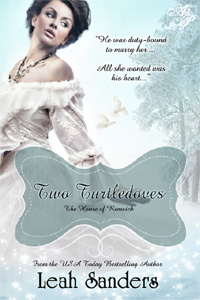 Baldwyn Sinclair, the Duke of Paisley, returns to London in the dead of winter at the request of his overbearing grandmother to find she has made a betrothal contract on his behalf... without his knowledge. Now he is to be married to none other than the girl who used to throw mud at him in order to gain his attention.

He is not happy about the prospect, but he is nothing if not devoted to duty.

Anastasia Trent has been in love with the Duke of Paisley since she was seven years old and has spent her life pining for him, fantasizing about the moment they would see each other again. But when he makes it clear that her imaginings are in vain, her disappointment drives her into the arms of a dangerous man.

It is up to Baldwyn to rescue her once again, to save her from herself, and to find perhaps, along the way, exactly what his own heart was looking for.

The Devil Duke Takes a Bride 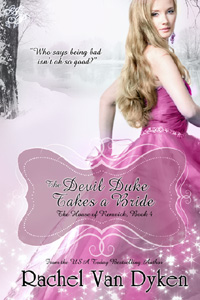 Benedict Devlyn, Duke of Banbury, has one thing on his mind and it isn't marriage. But things take a turn for the worse when his menacing and aunt throws a hitch in his plans to remain the most sinful and talked about man in the ton. After all, a man cannot keep the reputation of being The Devil Duke when he is leg-shackled to some simpering spinster.

But his aunt, bless her heart, thinks she's dying, and believes her nephew’s behavior is the only thing standing in the way between her entrance to heaven or hell. So she very lovingly and selflessly sets him up. With his childhood nemesis.

A young woman who, though she claims it was an accident, has nearly killed him thrice through her lack of grace and manners. It matters not that the minute he sets eyes on her at the Christmas ball, his blood boils with lust. He refuses to allow himself to fall prey to his aunt’s ministrations.

That is, until he is compromised and stuck in an engagement to a girl who claims she'd rather jump from a moving carriage than marry him. Funny thing that, for the very minute she says no, he finds his heart very much wants to say yes. When she doesn't leap at the chance to marry him, he sets about to not only prove that he's worthy of her favor, but also worthy of her heart.