I have always loved reading, but I am far from voracious. For one thing, I am kinda slow at reading. I'm told it's because I read every single word. I can't help it. If I skip something, it bothers me and I have to go back to make sure I didn't miss anything.

I know. OCD much? We'll just put that on the resume' as attention to detail. ;)

Anyway, I like a variety of genres. It comes in handy when teaching middle school kids, when I have to suggest books to people with a variety of tastes. Here are some of my favorites:

Ender's Game (this is a series, and each subsequent book is better than the last) by Orson Scott Card. This is the first science fiction book I ever read. My English professor when I was a junior in college suggested it to me. I love the way the author builds the future world in need of  a hero, a hero who is only six years old.

Andrew "Ender" Wiggin thinks he is playing computer simulated war games; he is, in fact, engaged in something far more desperate. The result of genetic experimentation, Ender may be the military genius Earth desperately needs in a war against an alien enemy seeking to destroy all human life. The only way to find out is to throw Ender into ever harsher training, to chip away and find the diamond inside, or destroy him utterly. Ender Wiggin is six years old when it begins. He will grow up fast.

But Ender is not the only result of the experiment. The war with the Buggers has been raging for a hundred years, and the quest for the perfect general has been underway almost as long. Ender's two older siblings, Peter and Valentine, are every bit as unusual as he is, but in very different ways. While Peter was too uncontrollably violent, Valentine very nearly lacks the capability for violence altogether. Neither was found suitable for the military's purpose. But they are driven by their jealousy of Ender, and by their inbred drive for power. Peter seeks to control the political process, to become a ruler. Valentine's abilities turn more toward the subtle control of the beliefs of commoner and elite alike, through powerfully convincing essays. Hiding their youth and identities behind the anonymity of the computer networks, these two begin working together to shape the destiny of Earth-an Earth that has no future at all if their brother Ender fails.

California’s gold country, 1850. A time when men sold their souls for a bag of gold and women sold their bodies for a place to sleep.

Angel expects nothing from men but betrayal. Sold into prostitution as a child, she survives by keeping her hatred alive. And what she hates most are the men who use her, leaving her empty and dead inside.

Then she meets Michael Hosea, a man who seeks his Father’s heart in everything. Michael obeys God’s call to marry Angel and to love her unconditionally. Slowly, day by day, he defies Angel’s every bitter expectation, until despite her resistance, her frozen heart begins to thaw.

But with her unexpected softening comes overwhelming feelings of unworthiness and fear. And so Angel runs. Back to the darkness, away from her husband’s pursuing love, terrified of the truth she no longer can deny: Her final healing must come from the One who loves her even more than Michael does…the One who will never let her go. 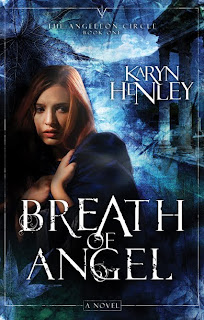 Breath of Angel by Karyn Henley is one of the books I have read recently that I just fell in love with (and while I'm on the subject, the second one in the Angeleon Circle series is amazing as well). Henley's storytelling, characters, and the development of the setting create a thing of beauty. Love this!

The stranger’s cloak had fallen back, and with it, a long, white, blood-stained wing.

When Melaia, a young priestess, witnesses the gruesome murder of a stranger in the temple courtyard, age-old legends recited in song suddenly come to life. She discovers wings on the stranger, and the murderer takes the shape of both a hawk and a man.

Melaia finds herself in the middle of a blood feud between two immortal brothers who destroyed the stairway to heaven, stranding angels in the earthly realm. When Melaia becomes a target, she finds refuge with a band of angels attempting to restore the stairway. But the restoration is impossible without settling an ancient debt—the “breath of angel, blood of man,” a payment that involves Melaia’s heart, soul, and destiny.

Thanks for letting me share some of my favorites with you! I would love to know about your favorite reads. Anything you recommend as can't miss?