Sweet Saturday: All We See or Seem 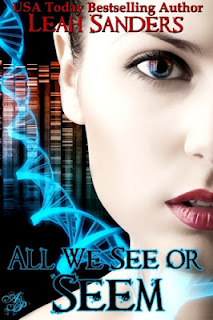 “What are you doing here, honey?”

Gryff hesitated. He wasn’t sure how to answer.

She seemed to sense his hesitation and a look of concern leaped to her face. “Is everything okay?” His mother wiped her hands with her apron and took a step through the door.

“Yes, ma’am. Long trip. I—” He started to give her the story he had rehearsed, but she interrupted him.

“It’s a wonderful surprise, honey. It’s just that we weren’t expecting you. Did you try to call?” She moved to embrace him, glancing around the front yard and toward the driveway, seeing only the back of the blue car from around the corner. “My goodness! You drove here?”

“Yes, ma’am. Like I said, long trip.” Gryff scrutinized his mother’s nonverbal cues to determine if she was buying his line. His behavior could easily be confused with fatigue and travel tension. Her mannerisms told him she believed the story.

“You must be exhausted! Come in, I’ll call your dad.” She stepped back into the entryway and held the door for him, gesturing for him to follow.

Gryff’s throat clenched. He wasn’t ready for that yet. “It’s okay, Mom. You don’t have to do that… it can be a surprise for when he gets home,” he said almost too quickly.

“Oh, he’s not working today. He’s in the study. You know he’ll be thrilled to see you!” Her laugh was genuine, innocent. Gryff had no doubt she knew nothing of his situation. The thought of facing his father though — that was still a frightening prospect. He felt vulnerable and unable to defend his position. And Gem all alone.

The thought plagued him. He couldn’t leave her out there.

He glanced over his shoulder again toward the parked car, then back to his mother. “Just a sec, Mom. I have someone with me… in the car.”

“What? You brought someone home? A girl? Dare I hope?” A wide grin broke across her lips, and she followed him down the walkway.

As they rounded the corner of the house to the driveway, Gryff saw him. His father stood holding the door to the passenger side open, offering his hand to help Gem out. Gryff stopped in his tracks and stared at the pair of them. Gem’s eyes were wide with fear, though she had taken the man’s hand and was stepping out of the vehicle.

“And who is this young lady, son?” His father’s gaze bore into him, and the foreboding smirk, coupled with the inflection of the final word, made Gryff’s heart plummet into his shoes. He glowered back at his father. And Gryff knew — they both knew.

The icy adrenaline vibrated through him. Would his father do something right here? In the open? Gryff stared down his father as he assessed the man’s intentions.

Robert glared back at him with a hint of amusement. And Gryff watched in horror as the man’s hand tightened around Gem’s arm ever so slightly, and he pulled her closer to his side.

“I see this son of mine has lost his manners. I’m Robert. And no matter what he’s told you about me, I’m as gentle as a lamb. Just ask my wife.” He swept a hand toward Gryff’s mother. “This is Cary.” He glanced back to Gryff, shooting daggers that no one else seemed to notice.

“Aaron, aren’t you going to introduce your little friend?” his mother asked.

Gryff shook his head as if to rid his mind of anxiety. “Yes, ma’am. I’m sorry.” He stepped toward Gem and reached for her hand, thinking to rescue her from his father. “Mom, Dad, this is Gem.”

Cary stepped between Gryff and Gem, blocking him from taking her arm. She lifted a hand to shake Gem’s. Gem looked at Cary’s outstretched hand in confusion and then glanced toward Gryff. He nodded and lifted his hand in demonstration, so she would know what to do.

The light of understanding glittered in her eyes, and she took the woman’s hand and pumped it twice hard. Surprise registered in his mother’s eyes with a hint of amusement. “It’s lovely to meet you, Gem. That’s a beautiful name. Gem — like a precious jewel,” she said with an accepting smile.

Gryff kept his gaze trained on his father.

“May I escort you inside, Gem?” Robert asked, casting a nonchalant look at Gryff.

Anger bubbled in his gut, and he turned sideways to allow the two to pass in front of him on the walkway. He knew his father wouldn’t do anything now. And not with Mom hovering over Gem like a doting mother hen.

“I’ll get our stuff,” he muttered and turned back to the car as they disappeared around the corner.


Gryff’s orders lay unopened on the table.
The silent tension caused Gem to bite her lip. She tucked a loose strand of auburn hair behind her ear and shifted uneasily in the chair. Wide-eyed, Gryff sat stiffly beside her, regarding the envelope. He was like a statue — hands on his knees — staring interminably at the table.
Finally, Gem cleared her throat. Gryff jolted as if in a daze and turned to her. A look of uncertainty hung in his eyes. She swallowed the dry, sticky taste in her mouth and reached for his hand. It felt cold… clammy. Gem could feel the faint tremor of his fear radiating through his fingers. She took Gryff’s hand between her own and squeezed, trying to infuse heat and reassurance at the same time.
“Sometimes they come back,” Gem’s voice was barely a whisper. It was a feeble attempt, but she was grasping at straws here.
Everyone knows.
They don’t come back. Never whole, anyway.
Posted by Leah at 10:00 AM