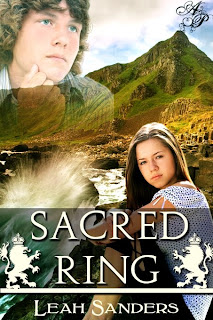 I am pleased to announce the release of my Valentine's Day novella, Sacred Ring.


Nothing in Kynan Murphy's life is going right. His grades are horrible, he's always in trouble, and the girl he likes doesn't know he exists. But things go from bad to worse when his parents tell him they have decided to split up. Angry and confused, he wants nothing more than to lash out against the world. The closest thing he can find, however, is the Saint Valentine shrine during a school field trip. Armed with some fireworks and encouraged by his best friend, Michael Connell, he's all set to vent his frustration with life.

His best laid plans fail when a mysterious priest confronts him, sharing an ancient secret about a hidden ring with special powers. Kynan believes the answer to all his problems and the only way to fix his parents' broken marriage is to find the ring -- a task he won't be able to accomplish on his own.

It was easy enough to convince his friend Michael to join him, but the irritating Brianna Collins insists on tagging along. Fortunately, her knack for language and interest in history is a valuable asset in the search. Their quest leads them to the northern coast and into dangerous territory where, in spite of their good intentions, they may lose their own lives.

I'm pretty excited about this book. It is amazing how much you can learn about a subject when you are going to write about it. I feel like a veritable font of information about Saint Valentine right now. :) Interesting bit of trivia about the writing of this book. Several of the characters (minor and major) are styled after my students, with their permission, of course. In fact, Brianna is so much like one of my girls that I have called her by the name Brianna on more than one occasion. Scary. Luckily, she doesn't seem to mind.


My favorite thing about this book is the way the characters interact with each other. Very much the way my students are with each other, which can be rather amusing most days.