As a special treat today, author Tracy Krauss is joining us to tell us a little about herself and her new release Wind over Marshdale. Thanks, Tracy! It's great to have you today. :)

Q: Who is Tracy Krauss?

A: Besides an author, I am an artist, drama director, worship leader and teacher. I’m all about the creative process, so everything I do has that bent to it. When I’m ‘making’ something – be it a painting, directing my vision for a play on the stage, playing an instrument, or writing a book – I feel energized. Sometimes I tend to burn myself out because I don’t rest much, but I like to be busy and I love all my creative pursuits, so it’s hard to drop anything.

I currently live in beautiful Tumbler Ridge, British Columbia, Canada, known for its many waterfalls. However, my husband and I have moved around a lot in our nearly thirty years of marriage, and many of the places we’ve lived have been in the far north. Places like Churchill, Manitoba — the ‘polar bear capital of the world’; the Yukon, which is next door to Alaska; and the North West Territories – all north of the 60th parallel. This has given me lots of fodder for my stories.

Q: When did you start writing?

A: I first started writing when my eldest was just a baby. I could hardly wait for her to go down for her nap so that I could pound away at my mother’s old typewriter. That was more than a quarter century ago. Four kids, plus homeschooling for nine years, plus going back to work as a public school teacher full time, and I finally signed my first contract in 2008. (This was after many, many rejections and a lot of hard work revising, querying, and revising some more.) My first book AND THE BEAT GOES ON released in 2009, followed by MY MOTHER THE MAN-EATER in 2010, PLAY IT AGAIN in 2011, and now, WIND OVER MARSHDALE in 2012. I’ve also had five plays published or contracted in that time with various play publishing houses.

Q: What authors have inspired your own writing?

A: Frank Peretti is still my favourite author. To me he is a groundbreaker. He’s tackled subjects that were previously considered taboo within Christian circles in such a compelling and thought provoking way that his writing is almost revered as truth. For instance, THIS PRESENT DARKNESS has almost become a manual on spiritual warfare, even though it’s fiction. I try to include some of this ‘edge’ in my own writing. Francine Rivers is another that comes to mind. She has written about some pretty controversial topics as well, and her characters are always believable; they aren’t perfect in other words. Again, this is what I strive for with my characters.

Q: Tell us about your current novel.

A: WIND OVER MARSHDALE takes place in a small prairie town where, on the surface, everything seems quaint and happy. Underneath there are some serious issues, especially with racism, sexual promiscuity, and the occult. Thomas Lone Wolf is a Cree man on a mission to build a heritage site near the town based on some ancient archaeological evidence. He and his children aren’t prepared for the level of prejudice they begin to face. Rachel Bosworth is the new Kindergarten teacher, fresh from the big city and running away from a hurtful past. Con McKinley is a local farmer, who also happens to be single and good looking. A love triangle of sorts develops, with the two men unwitting participants. As well, eccentric twin sisters bombard the town; one with her legalistic religious views and the other as a practicing witch. The local pastor has little effect trying to keep his parishioners in line since he is involved in some unsavoury business of his own. The lives of these and many other unusual characters weave together into a surprising climax. Beneath it all is a thread linking everyone’s problems to the spirit realm; an ancient curse from the past that must be dealt with once and for all.

A: I have two more finished novels and several works in progress. I’m just in the process of polishing up CZECH OUT, about a hockey player who defects to North America during the cold war, and THREE STRAND CORD, a romantic mystery about three friends. Once they’re ready for submission I’ll be pitching them to my agent. I’m also always pitching plays as well, since I write most of my own material for my drama troupe. Finally, I’m publishing an illustrated children’s book. I just finished all the artwork and it should be ready fairly soon. 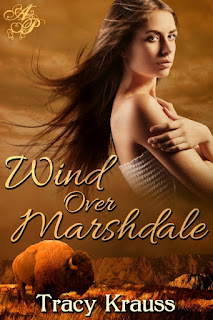 Marshdale. Just a small farming community where nothing special happens. A perfect place to start over… or get lost. There is definitely more to this prairie town than meets the eye. Once the meeting place of aboriginal tribes for miles around, some say the land itself was cursed because of the people’s sin. But its history goes farther back than even indigenous oral history can trace and there is still a direct descendant who has been handed the truth, like it or not. Exactly what ties does the land have to the medicine of the ancients? Is it cursed, or is it all superstition?

Wind Over Marshdale is the story of the struggles within a small prairie town when hidden evil and ancient medicine resurface. Caught in the crossfire, new teacher Rachel Bosworth finds herself in love with two men at once. First, there is Thomas Lone Wolf, a Cree man whose blood lines run back to the days of ancient medicine but who has chosen to live as a Christian and faces prejudice from every side as he tries to expose the truth. Then there is Con McKinley, local farmer who has to face some demons of his own. Add to the mix a wayward minister seeking anonymity in the obscurity of the town; eccentric twin sisters – one heavily involved in the occult and the other a fundamentalist zealot; and a host of other ‘characters’ whose lives weave together unexpectedly for the final climax. This suspenseful story is one of human frailty — prejudice, cowardice, jealousy, and greed — magnified by powerful spiritual forces that have remained hidden for centuries, only to be broken in triumph by grace.

Tracy Krauss is an author, artist, playwright, director, worship leader, and teacher. Originally from a small prairie town, she received her Bachelor’s Degree at the University of Saskatchewan. She has lived in many places in northern Canada with her husband, a pastor, and their children. They currently live in Tumbler Ridge, BC.

Published works include four romantic suspense novels: AND THE BEAT GOES ON, where archeological evidence for creation comes at a heavy cost; MY MOTHER THE MAN-EATER, the story of a ‘cougar’ who takes on more than she bargained for; PLAY IT AGAIN, about an unlikely match during the 1980s rock n’ roll scene; and WIND OVER MARSHDALE, where strong spiritual forces rock a seemingly peaceful prairie town. She also has several stage plays in print. Visit her website for more details.
Posted by Leah at 10:45 PM